Friar Fox and Gillian of Brentford

To playwrights in Philip Henslowe's diary

The playbook was intended for the Admiral's Men at the Rose in the spring of 1599. No corresponding record of performance survives.

The “fox” of the title recalls anthropomorphized figures from classical and medieval fable, and the episodic Roman de Renard tradition is probably its immediate source. By the fifteenth century, the “false fox” Reynard (or Reinhard, Rénert, and Reynaerde in Germany, France, and the Low Countries) had become a widely recognized personification of predatory instinct, cunning, and hypocrisy. Like Aesop’s fox and the fox-devil of medieval bestiaries, Reynard was inherently vice-like and dangerous to body and soul. Caxton’s 1481 edition of The Historye of Reynart the Fox marks the first of the character’s many late medieval and early modern appearances in English print (Varty, Reynard the Fox 23-24).

In one of the narrative’s oldest episodes, Reynard captures Chantecler the Cock in Farmer Constance’s yard (Varty 31-42, figures 23-47). Depictions of this scene in cathedral sculpture and manuscript illumination represent the fox on hind legs, wearing a friar’s habit and preaching to a flock of unwary geese (Varty 51-59). This antifraternal trope belonged to a wider tradition of satire and criticism directed towards the monastic clergy. “By the fourteenth century,” according to Kenneth Varty, “Reynard had developed from a living character to a symbol and figure used by many a writer to tell truths about the Church which it might have been dangerous to tell openly.” (59) 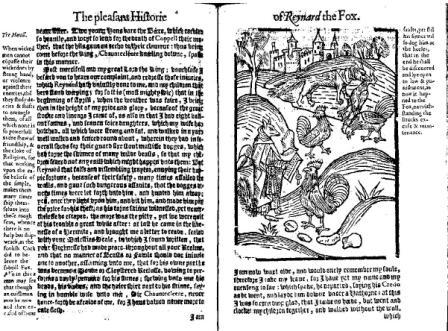 Sig. B3v-B4 from The Most Delectable History of Reynard the Fox (1620)

The character took on new resonance after the Reformation. The 1583 edition of Acts and Monuments relates a revealing anecdote in which Hugh Latimer explains the nature of religious “metaphors and lyke significations” that are “so common and vulgar to all men that the very Painters do paynt them on walles.” According to Latimer: “when they paynt a foxe preachyng out of a Frier’s coule, none is so madde to take this to be a foxe that preacheth, but know well enough the meanyng of the matter, which is to paynt out vnto us what hypocrisie, craft, and subtile dissimulation lyeth hid many tymes in these Frier’s coules, wylling vs thereby to beware of them.” (Foxe 1734-1735)

Sixteenth-century Brentford lay in Middlesex, west of the northern theatres, and was a popular resort for early modern Londoners. It was site of the notorious Three Pigeons inn, run for a time in the seventeenth-century by the King’s player John Lowin.

Gillian (or “Jyll”) is a popular folk figure of obscure origin associated with the area. She was evidently an elderly, heavy-set inn-keeper prone to alienating her guests with profane jests. Robert Copland’s Jyl of Breyntfords Testament (1563, 1567) describes her as “a widow of a holy sort / Honest in substance & full of sport” (sig. A2). Copland’s text offers not so much a narrative as a single scatological moment repeated ad nauseum: for her own delight and to antagonize her neighbors, the “mery widow mastres Iyllian” calls one day upon a curate to help her compose her last will and testament. In the travesty that follows, she exuberantly grants twenty-five legatees (including the Curate) a epic “bequest of farts”:

He that dooth nothing, but shaue and poll
and taketh no thought / to saue his soll
Shall haue a fart, his passing bel to toll.

A Prentice, or seruant that wil not obay
and wil not lerne, but oft run away
a fart for his freedome, I doo puruay.

He that suffereth his wife to do her lust
and seeth that to folly she is ful trust
Shall haue a fart, though I should burst. (sig. B)

And so on. Gillian’s considerable girth is implied by the Rabelasian manner in which she performs her final bequest:

With that she groned as panged with pain
griping her bely with her hands twain
And lift vp her buttok somwhat a wry
and like a handgun, she let a fart fly (sig. B2)

Allusions by Elizabethan playwrights attest to Gillian’s secure place in late sixteenth-century popular culture. The prologue to Nashe’s Summer’s Last Will and Testament, for instance, asks: “What can be made of Summers last will & Testament? Such another thing, as Cyllian of Braynfords will, where shee bequeathed a score of farts amongst her friends.” (sig. B2)

Shakespeare also makes a well known reference in The Merry Wives of Windsor to “the wise woman of Brentford” (sig. F4).

Freedman proposes that “Gillian’s currency with popular audiences would have been more likely after 1597” and observes that The Merry Wives of Windsor may contain an echo of the lost play in its “interaction between a citizen wife and one Sir John (a term for a friar)” (“Shakespeare Chronology,” 207)


Matusiak puts "Friar Fox and Gillian of Brentford" in the context of plays about friars. He cites Henslowe's inventories, which have various sets of friars' gowns and hoods, as evidence that :"friars were a regular part of the spectacle at the Rose and Fortune playhouses" (209). Recalling the folk traditions both of the "'false fox'" that was "known across Europe as a symbol of clerical hypocrisy" and the "inn-keeper ... prone to antagonizing her guests with profanity," Matusiak suggests that the lost play "presumably dramatized a grotesque encournter between a havited couse of Volpone and Brentford's Rabelasian innkeeper," possibly relying also on "the recurrent trope of a rural woman with a distaff over her shoulder chasing a fox fleeing her yard with a goose in its jaws' (215, 216, 217).

Spain-Savage argues that Shakespeare capitalized on the folk figure of Gillian of Brentford in the comic episodes of The Merry Wives of Windsor in which Falstaff disguises himself to escape detection from the wives' jealous husbands. She reads the oft-labeled textual crux in mis-matched lines from the quarto and folio (... "Gillian of Brainford," ""fat woman of Brentford") as Shakespeare's attempt to connect "the merry wives ... and the cunning trade" (239).

The falsely pious fox-friar was a significant genetic ancestor of the many vice-like friars populating Elizabethan drama.

A related visual trope deriving from the Reynard tradition and often found in church and manuscript iconography was that of a rural wife with a distaff over her shoulder chasing a fox with a goose in its jaws out of her yard (Varty 31-42, figures 23-47). If the lost play’s author(s) chose to conflate this aggressive female figure with Gillian of Brentford, the relationship between the play’s two eponymous characters may have been comically antagonistic and perhaps farcically violent. We might speculate, moreover, that the central interaction between “Jyl” and the Curate in Copland’s text would have created an opportunity to transpose Friar Fox into that comic situation.

The play’s matching of a trickster friar with a distinct female character anticipates the similar pairing implied by the lost "Friar Rush and the Proud Woman of Antwerp" (1602).