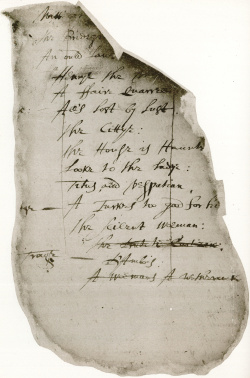 Malone does not comment on the source or narrative of Titus and Vespasian (p. 292); Collier points out that Malone had changed the name of one title character, printing it "Vespasian," not "Vespacia" (as Greg and Foakes also see it), but he makes no further comment about the altered name (p. 24). Fleay, BCED has nothing to say about "Titus and Vespasian" in its specific entry (2.298 #114), but he produces a theory about it in the context of Titus Andronicus. Mulling over the means by which Titus Andronicus "came to be produced by Sussex' men," Fleay confesses his puzzlement that it was "so close a reproduction of the "Titus and Vespasian" of 1592 in plot and treatment" (2.299 #128).