NB: The title used here is not uncontentious - see discussion below.

In 1968, the Bodleian Library acquired a set of papers associated with the Herrick family of Leicestershire. Bodleian Library: MS.Eng.hist./c.476/fol.133 is described, in the library catalogue, simply as a "Prologue to the Square Play". For the catalogue itself see here. The document itself consists of a prose prologue addressed to an unnamed nobleman in which "poor Amintas" apologises for the entertainment he is about to offer with the aid of his "silly" shepherd boys. 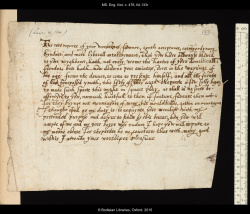 As transcribed by the nineteenth-century scholar J. G. Nichols, the text runs as follows:

The rare reporte of your worshipes favoure, gentle acceptance, extrayordynary kyndness, and most lyberall intartaynment, that you have allwayse shewed to your neyghbores, hath not onely wonne the hartes of your domesticall frendes, but hath now drawne pore Amintas, even in the wayninge of his age: frome the downes, to come to presente himself, and alle the frewtes of his forepassed youth, the lyvly ofspring of this aged sheparde a few sylly boyes, to make such sporte this nyght in square play, as shall in no sorte be offencyve to yow, nor much hurtfull to them if fortune favoure them not, for they beynge not mountaynes of mony, but mouldhilles, gotton on mountayns, I thought good as my duty is: to acquynt your worshipe with my pretended purpose, and desyre to know by this bearar, how you will acepte of me and my pore boyes whose rudnes I hope you will impute to my meane estates, for shepardes be no courters: thus with many good wishis I attende your worshipes pleasure.

Acted by schoolboys in front of a nobleman

Pastoral? (Reference to Amintas) Or not a play at all? (as suggested by Nichols)

At first glance, this appeared to be a completely unknown lost play. However, the Prologue is mentioned by Harbage in his Supplementary List II (p.217). Harbage dates it provisionally to 1570-1590, and links it to other records of lost plays in the same collection associated with the Herricks. The text of the prologue was published by J. G. N[ichols] in Notes and Queries in 1860. Nichols doubts that the entertainment that followed was necessarily a play, thinking it might merely have been an exhibition of skill with quarterstaves, and later that year "H.", another contributor to Notes and Queries, supported this interpretation of the phrase.

On closer examination, a lot depends upon whether there is any warrant for the title, used by the library catalogue, "the Square Play". That phrase can't be corroborated from the document itself, which merely refers to "square play", a much more ambiguous phrase.

An EEBO-TCP search does not provide obvious support for Nichols's suggestion that the phrase might be one that refers specifically to quarterstaff demonstrations. "Square play", in most of the uses recorded by EEBO-TCP, seems to be used in a gambling context to denote honest play rather than cheating, which is also the meaning given by OED, square a. 9a.

April 2016: With the aid of the LPD image, it becomes apparent that there is an error in Nichols' transcription. It's not "beynge", but "brynge". That is, the boys are bringing something with them, not mountains of money, but molehills. (Presumably these aren't literal molehills: is this just a periphrasis for gifts of small value?)