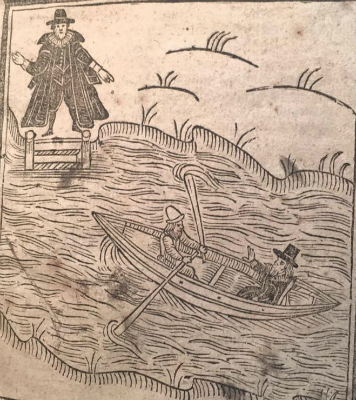 Henry Burton's polemical tract A Divine Tragedy (1636) is, essentially, a catalogue of cases where God has visited gruesome punishments upon enemies of puritanism. In particular, Burton offers a long and hostile account of the death of Charles I's Attorney-General William Noy, including an allegation that his death was made into a play:

Being opened after his death, ther was not a drop of bloud found in his body, for he had voided al out before, his false malicious hard heart with inward fretting & vexing was so consumed & shrinked up, that it was like an old rotten leather purse or meere scurfe, the Physicians never seeing the like before, his flesh and kidnies were as black as an hat, his intrails (except his lungs onely) all putred; and his carkas a miserable spectacle, but no stone that could trouble him was found about him: his funerall according to his desire was so private, that there were hardly Gentlemen enough to carry him to his grave, but that some came in by accident. His clients the Players, for whom he had done knight-service, to requite his kindnes, the next Terme following make him the subject of a merry Comedy, stiled; A Projector lately dead; wherein they bring him in his Lawyers robes upon the Stage, and openly dissecting him, find 100. Proclamations in his head, a bundle of old motheaten records in his maw, halfe a barrell of new white sope in his belly, which made him to scoure so much, and yet, say they, he is still very black & foule within. And as if this voiding of all his owne blood, & publike disgrace on the Stage were not sufficient to expiate the wronged Gentlemans bloud & infamy: himselfe in his last will layes a brand on his owne son and heire...

The play is also mentioned in a contemporary letter to the Massachusetts aristocrat John Winthrop. In the judgement both of Bentley and of Noy's biographer Jones, this letter is derived from Burton rather than being an independent witness. (See Bentley, 5.1398). Anthony a Wood also mentions the play in his biography of Noy - "The Players also for whom he had done no kindness, did, the next Term after his decease, make him the subject of a merry Comedy, stiled A projector lately dead, &c." (Wood, Athenae Oxonienses, 1.507). This too appears to be derived from Burton.

See For What It's Worth.

Possible references to the Play

None known beyond those cited already.

Bentley suggests that the play might have not have existed, and that the description of it might be wishful thinking by Burton. Harbage, too, reports the possibility this might be a ghost title. Noy's biographer Jones is reluctant to accept this argument, suggesting that it might have been a “minor production” of some sort.

William Noy (1577-1634), lawyer and MP, was Charles I's Attorney-General. He was from a Cornish gentry family, and studied at Exeter College, Oxford before training as a lawyer. Thereafter he established himself both as a legal intellectual, and as a politician, being appointed Attorney-General in 1631. He was in the thick of many of the political controversies of the early 1630s, being particularly associated, in the public mind, with the various new forms of indirect taxation developed by Charles so as to raise money without calling a parliament. Noy was involved in the development of forest fines; in the Ship Money tax; and, in particular, in the widely disliked soap monopoly. (For details see Hart; Jones). Noy died on 9 August 1634, so that the play took place (according to Burton) in Michaelmas Term of that year.

This play was a specimen of anti-projector satire. Projectors are frequent satirical targets in Caroline drama, as in, for instance, Richard Brome's The Court Beggar (1640) in which a central character, driven mad by excessive pursuit of monopolies, appears attired in legal papers with a windmill on his head, and is only cured by the removal of all his patents; or James Shirley's The Triumph of Peace (1634), which contains an antimasque of projectors. This play can be compared to these and other anti-projector plays.

A particularly useful analogue is

• Anon. A Description of the passage of Thomas late Earle of Strafford over the river of Styx, with the conference betwixt him, Charon, and William Noy ([London]: n.p., 1642).

This pamphlet dialogue features William Noy as a speaking character. Seven years after his death, he is in hell, talking to the Earl of Strafford, newly arrived there. Noy even features on the woodcut title-page, still, seemingly, wearing the long robes of a lawyer, as he was costumed in the lost play: and even in hell, Noy is still a projector, trying to establish the right to tax all those travelling over the River Styx. As Charon complains:

He had begot a whimsey, what do you call it, a project, I a project, that out of the small Incomes that I receive, which is but a halfe-penny a Ghost, I should pay a penny out of every passenger I do transport, as a gratification, or rentage, to great Pluto.(A2v)

A gloss on the phrase, "His clients the Players, for whom he had done knight-service..." - as the context makes clear, Burton refers here (sarcastically) to what he considers Noy's betrayal of William Prynne over Histrio-Mastix. Noy encouraged Prynne to print it, says Burton, and then failed to protect him from the consequences in the form of punishment and mutilation (Burton, A Divine Tragedy, 43).

There are three other analogues that might be helpful.

• Brugis, Thomas. The discovery of a proiector shewing the beginning, progresse, and end of the projector and his projects : also the projectors last will and testament, with an epitaph to his memory. London: R. H., 1641.

Thomas Brugis was a surgeon and medical writer, the Discovery of a Projector being his only recorded foray into satirical writing. It is a character-sketch in the Theophrastan style, a mock biography of an imaginary (and unnamed) Projector. It includes a a description of the Projector's rise; a list of dozens of his fanciful projects for monopolies; the fatal illness which stops his career; and a description of his will. Although only printed in 1641, in a climate where the breakdown of censorship led to an explosion in printed satire, the text was written, Brugis states, “many yeeres” before. It thus speaks to the anti-projector satire of the 1630s, and represents the sort of material out of which one might expect A Projector Lately Dead to have been built.

The two texts attributed to Heywood are adaptations of the material in Brugis's pamphlet, sharing much of the phrasing of Brugis's version but each rather shorter overall. In spite of their comparative brevity, they do include some episodes missing from Brugis's version, including an account of the projector's funeral. As a specimen of the tone of these texts, here is the conclusion of Hogs Character of a Projector Being a relation of his life and death:

Hee fell sicke of a scouring at a Reference, sounded at a certificate, lay in a trance at Master Attorneys, and recovering fell into a relapse at the privie Seale, where he dreamt of Angels ascending and descending, and waking found not his Patent seald, died with an obstruction or stopping at the great Seale, and made no Will as his predecessors did... Hee was buried in pompe, the Companies in London going before, and the Corporations he made in the Countrey behind, he was carried from the Temple walkes without Heraulds to the Divell and St. Dunstans, where he lies interred, hoping to be saved by Apollo.

Update: The Bodleian Library copy of Nicholas Cox's An exact catalogue of all the comedies, tragedies, tragi-comedies, opera's [sic], masks, pastorals and interludes that were ever yet printed (1680) includes a contemporary manuscript note at the start detailing various suggestions for improvement to the catalogue. The handwriting is undetermined, but the content makes clear that the writer is based at Oxford in the year 1680. Among the suggestions for addition are: "A projector lately dead, [illeg.] 1634 made against Will Noy lately Attorney Gen." This cannot, by itself, be considered evidence of a lost print edition, since the preceding note specifically suggests widening the scope of the catalogue to include plays "not yet extant" [in print form]. But it awaits fuller investigation. The Bodleian Library copy, including its manuscript notes, is accessible through Early English Books Online.

Anon. A Description of the passage of Thomas late Earle of Strafford over the river of Styx, with the conference betwixt him, Charon, and William Noy ([London]: n.p., 1642).
Brugis, Thomas. The discovery of a proiector shewing the beginning, progresse, and end of the projector and his projects : also the projectors last will and testament, with an epitaph to his memory. London: R. H., 1641.
Burton, Henry. A divine tragedie lately acted, or A collection of sundry memorable examples of Gods judgements upon Sabbath-breakers, and other like libertines, in their unlawfull sports. [Amsterdam: J.F. Stam, 1636].
Butler, Martin. Theatre and Crisis 1632-42. Cambridge: Cambridge UP, 1984.
Cox, Nicholas. An exact catalogue of all the comedies, tragedies, tragi-comedies, opera's [sic], masks, pastorals and interludes that were ever yet printed and published till this present year 1680. Oxon: L. Lichfield, 1680.
Hart, James S., Jr. ‘Noy , William (1577–1634)’, Oxford Dictionary of National Biography, Oxford University Press, Sept 2004; online edn, May 2009 accessed 10 May 2010
Heywood, Thomas. Hogs caracter of a projector wherein is disciphered the manner and shape of that vermine. London: G. Tomlinson, 1642.
Heywood, Thomas. Hogs character of a projector being a relation of his life and death, with his funerall. London: n.p., 1642.
Jones, W. J. ‘“The Great Gamaliel of the law”: Mr Attorney Noye’, Huntington Library Quarterly, 40 (1976–7), 197–226.
Ward, Jenny. ‘Brugis, Thomas (b. in or before 1620, d. in or after 1651)’, Oxford Dictionary of National Biography, Oxford University Press, 2004 accessed 10 May 2010
Wood, Anthony à. Athenae Oxonienses...The First Volume. London: Tho. Bennet, 1691.