Play of the Saxons

Anon. (1617?)
NB. "Play of the Saxons" is a recent assignation (from Wiggins 1817) for this untitled play. The name is used here for convenience. 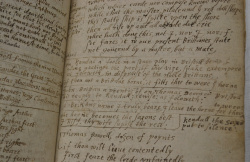 Transcription (based on REED Bristol 215):


on Kendal a foole in a stage play in Bristoll being
m˹e˺erie acctinge the part of the vize, spake extempore
as foloweth, in dispraise of the noble Brittans,
if thou art a Brittane borne, it fitts thee to were ye horne
Iohn Brittan a prentiz of on Thomas Dean of Bristoll
his re-ply to Kendall: twise: as foloweth:
A Brittans name I truly beare, I leaue the horne for thee ˹^to were:˺
the horne becomes the saxons best
I kisd thy wife supose the rest:
...

Performed by an unknown company at Bristol. Powell names the player in the role of Vice as one "Kendall", which may refer to William Kendall (Admiral's/Palsgrave's company) or Richard Kendall (King's Revels company). Wiggins (1817) notes that the Palsgrave's Men visited Bristol for the only time in late 1617, and tentatively suggests this as the most likely auspices of the performance in question. This would make the anecdote an old one, being recollected some three or four years later. The alternative is that the anecdote was recent, in which case it may derive instead (as Wiggins suggests) from a performance by Lady Elizabeth's Men in Bristol between 30 September and 25 December 1620. (But in that case, the identity of Kendall remains unsolved).

Inasmuch as it cannot be said with any certainty whether Kendall's character literally had a horned Saxon helmet or whether he was simply referring to one, we technically can't be sure that the play even featured Saxons and Britons. It may simply have been a throwaway line from an otherwise unrelated play, rather than being a play concerned with the Saxon invasion (though this, too, does remain a possibility). The presence of a Vice character complicates any straightforward identification of the play as 'history'.

Preiss, drawing attention to the use of the word "twice", notes that "So total is the confounding, indeed, that Brittan repeats his zinger 'twise' -- perhaps in exultation, or perhaps because he really wants to hear the comeback, and refuses to let the over-matched clown off the hook" (92).

Wiggins (1817) appears to be the only other scholar to comment on this play since the relevant excerpt from Powell's commonplace book was published in REED: Bristol.

Wiggins notes that William Kendall "seems to have been known for his facility with witty improvisation... If he was the Kendall performing at Bristol, then part of the point of the anecdote is that he was bested in his own speciality by a member of the audience" (1817).

There was indeed a well-established Bristol citizen, of around the right date, called Thomas Dean. A mercer by trade, Thomas Dean was made a burgess of Bristol in 1604. Either he, or another mercer of the same name, is also recorded in a Bristol property audit of 1627; and, in 1629, appraising the inventory of a recently deceased fellow merchant. See Price, 20; Livock, 86, 88; McGrath, 80. So far, his apprentice John Britton has not been traced.