Edward Archer, "An Exact and Perfect Catalogue of all the Plaies that were ever printed; together, with all the Authors names; and what are Comedies, Histories, Interludes, Masks, Pastorels, Tragedies", appended to The Old Law (1656). 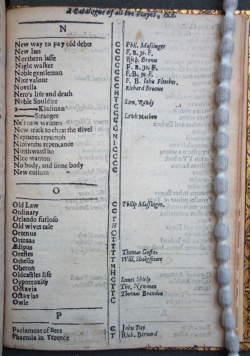 Comedy, or tragedy (seemingly listed as both in 1656 record)

Greg suggests that Ortenus and Ortenas are two records of the same play. He conjectures that Hercules Oeteaus, already misprinted "Hercules Ortaeus" in the list, might be the one intended.

Bentley concurs that the record is corrupt: "The title is probably the result of some confusion and not evidence of another lost play" (5.1384).

EEBO-TCP currently sheds no obvious light on this one.

I'd suggest the additional possibility that the two entries are both errors for STC 4016.5:

Racan's pastoral Artenice was performed at court by Queen Henrietta Maria and her ladies in 1626, hence the printing, in London, of a French-language text. As a printed drama, it would technically have fallen within Archer's remit, but he does not otherwise mention it. To anyone with poor French, while the layout of the publication marks it out as obviously a drama, its genre is much less clear. For instance, a reader seeing the reference to "sacrificateurs" in the dramatis personae (A6v) might assume it to be a tragedy, but closer inspection of the dialogue would reveal that it actually ends as a comedy: this might be enough confusion to cause the two contradictory opinions as to its genre.

L'Artenice is perhaps not much a better bet than Hercules Oetaeus, but in either case the conclusion is that we should not regard Ortenus/Ortenas as certain evidence of two, or even one, lost printed plays.