In 1598 Francis Meres, a cleric and schoolmaster, published a lengthy essay entitled Pallidas Tamia, Wits Treasury in which he praised contemporary English poets by comparing them favorably to their classical counterparts. He wrote the following paragraph about Shakespeare:

As Plautus and Seneca are accounted the best for comedy and Tragedy among the Latines: so Shakespeare among ye English is the most excellent in both kinds for the stage; for Comedy, witnes his Ge[n]tleme[n] of Verona, his Errors, his Loue labors lost, his Loue labours wonne, his Midsummers night dreame, & his Merchant of Venice: for Tragedy his Richard the 2. Richard the 3. Henry the 4. King Iohn, Titus Andronicus and his Romeo and Iuliet (Meres).

A leaf of manuscript—apparently a packing slip—dated 19 August 1603 on the verso (9 August on the recto) was discovered in 1953 by a London bookseller and antiquarian named Pottesman as part of the binding of a collection of sermons printed in 1637 (Certaine Sermons). Pottesman showed the leaf of manuscript to American scholar T. W. Baldwin as he was leaving the British Museum (now, British Library) on the evening of 31 December 1953. Baldwin researched the provenance of the manuscript and determined that it represented property of Christopher Hunt, a bookseller who moved to Exeter in 1603 when he finished his apprenticeship in London. According to Baldwin, Hunt had books shipped to him at his new location, and this manuscript leaf was part of the packing slip. In 1607 Hunt returned to London where he continued his trade. Baldwin published his findings in Shakspere's Love's Labor's Won in 1957. 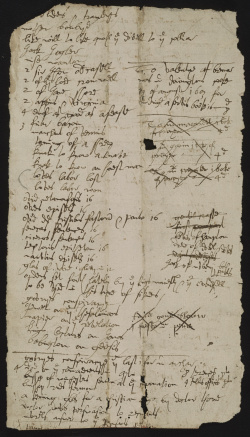 Christopher Hunt, Fragments of a Stationer's Account Book, (1603-1607) (August 1603), Pre-1650 MS 153; Reproduced by permission of the Rare Book & Manuscript Library, University of Illinois at Urbana-Champaign. (Inquiries about further use)

A reasonable assumption, based on Shakespeare's authorship, is that "Love's Labour's Won" belonged to the Chamberlain's men. The date of acquisition, sometime between 1594 and 1598, is predicated on the assumption that Shakespeare wrote the play as a sequel to Love's Labour's Lost. If the play did belong to the Chamberlain's Men, it would have been staged at the Theater (built by James Burbage in 1576, Shoreditch Road), where the players performed, 1594-7; in 1598, the company moved across the street to the Curtain because they had lost the lease on the property of the Theater.

A reasonable assumption is that Shakespeare's Love's Labour's Lost is a narrative and dramatic source for "Love's Labour's Won." The most logical guess at a story is the courtships suspended at the close of Love's Labour's Lost, but there are play titles that advertise themselves as mates yet do not carry over either characters or story lines from their apparent companion play: for example, A Knack to Know an Honest Man (matched by title with A Knack to Know a Knave) and Every Man out of his Humour (matched by title with Every Man in his Humour).

Fleay initially accepted "Love's Labour's Won" as a lost play by Shakespeare (Chronicle History of the Life and Work of William Shakespeare, p. 104), but he soon began to consider the play "the nucleus" of All's Well That Ends Well (Shakespeare Manual, p. 24). Support may also be found for the title as a mask for The Taming of the Shrew, which scholars believed to have been written and staged well before 1598 but which Meres does not include in his list of exemplary Shakespearean comedies. Chambers, showing the inclination of scholars to perceive "Love's Labour's Won" as an alternative title for a surviving play, settles on The Taming of the Shrew without much enthusiasm; he considers it "the only comedy which, as it stands, could fill a gap in Meres's list" (1.273).


Baldwin revolutionized scholarly thinking about the play in Shakspere's Love's Labour's Won by publicizing the manuscript leaf found by Mr. Pottesman and researching the provenance of that leaf. He concluded that the document proved that "there was in print a play called Love's Labor's Won" (15) but he held on to his former opinion that that the play masquerades in the First Folio as All's Well That Ends Well (15).


Knutson projects a stage history for the play. She suggests a debut in the spring of 1595 (50), with the play offered in tandem with its first part, Love's Labour's Lost (51). Noting that the play was apparently not revived when its companion was given at court on 6 January 1605, she deduces that the play was already lost by that time (52) and thus unable to be found by Heminges and Condell for inclusion in the First Folio (53).


Wiggins, Catalogue (#1109) guesses 1598 as the date of "Love's Labour's Won". He is persuaded by 'a vacant slot' in 1598 in the chronology of Shakespeare's authorship (this guess presupposes a date of 1596 for Love's Labour's Lost, on which composition—everyone agrees—"Love's Labour's Won" depends). Wiggins accepts the stock list of Christopher Hunt at face value as evidence that the Exeter bookseller did indeed have a copy of the now-lost play for sale at his shop (this is the stock list that Baldwin printed but disbelieved as evidence of a discrete sequel in narrative and title to Love's Labour's Lost).

Reviewers of Baldwin's book on the Pottesman manuscript leaf were skeptical of Baldwin's argument, to say the least, and their objections are noteworthy because the reviewers were heavy hitters in the profession. No one doubted the authenticity of the document, but each of Baldwin's conclusions was challenged. W. W. Greg was most generous, criticizing mainly Baldwin's "playful sallies" (239). G. K. Hunter questioned the identification of Christopher Hunt in Exeter as the stationer of record in the manuscript; Hunter suggested that a Salisbury stationer was more likely (412). R. C. Bald seconded this, offering a member of the Hammond family (278). Hunter questioned further the very neatness of the list of plays on the manuscript leaf as bookshop stock, suggesting an order for books rather than an inventory (412-3). James G. McManaway (who signed his review "J. G. M.") agreed with Baldwin on this point (370). Hunter questioned also the degree to which the Pottesman manuscript leaf provides independent proof of a play called Love's Labour's Won (413); Bald questioned whether such a play was by Shakespeare (278-9).