Difference between revisions of "Tamar Cham, Parts 1 and 2"

This plot, for a revival of Part 1 by the Admiral's Men in 1602, was transcribed by Steevens and printed by Isaac Reed in the "Variorum" Shakespeare of 1803; the original has since disappeared. Only the published transcription survives. Steevens' version of the plot does not appear to have been digitised currently, and most scholars rely on Greg's reprinting (from Henslowe Papers 145-48 (Internet Archive)), which does not preserve the layout. Here is Steevens' edition, courtesy of the Folger Shakespeare Library: 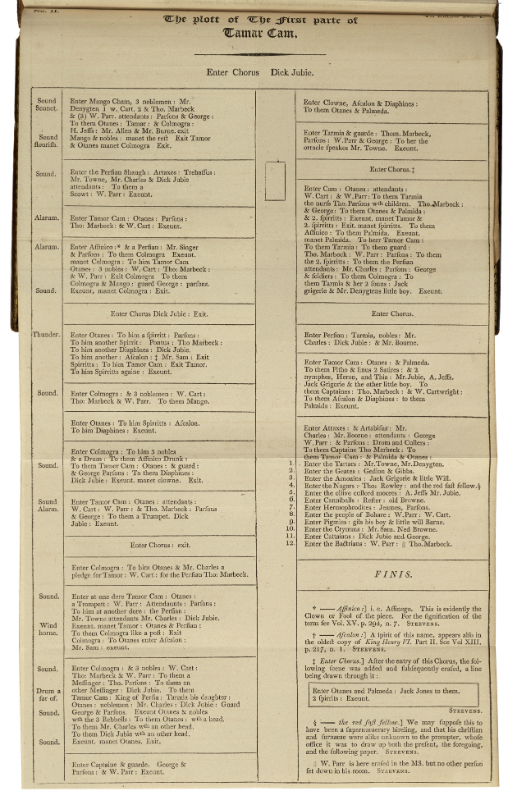 “The Plotte of the First Parte of the Tamar Cam”, The plays of William Shakspeare : in twenty-one volumes : with the corrections and illustrations of various commentators, to which are added notes / by Samuel Johnson and George Steevens. 1803. Foldout after leaf 2D8 verso (page 414). Folger PR2752 1803a v.3 copy 1 Sh.Col. Reproduced by permission.

Initially produced by Strange's, with Part 2 being performed on 28 April 1592 (marked "ne" by Henslowe). The plays were acquired by the Admiral's by 1596, when Part 1 was revived on 06 May and Part 2 on 11 June. The Admiral's bought the book of the plays from Alleyn in 1602. Greg (Dramatic Documents, 161) notes the absence of Jones and Shaa (indicating performance after January 1602) and the presence of Singer (indicating a date of before 1603, when he left the company).

Eyre. My liege, a very boy, a stripling, a younker. You see not a white hair on my head, not a grey in this beard. Every hair, I assure thy Majesty, that sticks in this beard Sim Eyre values at the King of Babylon's ransom. Tamar Cham's beard was a rubbing-brush to't. Yet I'll shave it off and stuff tennis balls with it to please my bully King. (XXI.20-25)

In their gloss to this line, the Revels editors suggest that "[p]erhaps something special was made of the hero's beard" in the lost "Tamar Cham" plays, and further note the recurrence of beard imagery in Much Ado, when Benedick offers to fetch "a hair off the great Cham's beard" (II.i.237-8).

In Timber: or, Discoveries, Jonson complained of "the Tamerlanes, and Tamer-Chams of the late Age, which had nothing in them but the scenicall strutting, and furious vociferation, to warrant them to the ignorant gapers" (H&S 8.587).

Greg suggested that "[i]f the play was written as a rival to Tamburlaine, what more effective counterblast could there be than one celebrating the exploits of the far greater conqueror Jenghis Khan? The suggestion tallies well with the prominence given to the Persian Shah, who would in that case be Mahommed of Khwarizm, and the procession of subject races at the end of Part I would be entirely appropriate; while the Second Part might be supposed to have celebrated the Mongol successes in Russia and China. It is possible that the unknown author boldly altered the name of his hero to one more familiar to his audience, but it is also conceivable that he knew that Jenghis Khan is properly an honorific and that his real name was Temuchin, and made this an excuse for giving his play a title closely similar to that of the piece he sought to rival" (Documents, 161-2).

McInnis suggests on the basis of the plot that "2 Tamar Cham" "had as much in common with the fantastical and magical elements of Faustus as it had an affinity with the Tamburlaine phenomenon", judging by the procession of distinctly exotic characters at the end of the play: "The participants in this procession belong more to Mandevillian fantasy than chronicle history; their prominence in the denouement of the play suggesting that the allure of the exotic was (for the audiences of ‘1 Tamar Cham’) as much of a draw as the adoption of subject matter overtly reminiscent of Marlowe’s hugely successful conqueror plays" (71-72).

Manley and Maclean have conjectured at greatest length about the likely content of the second part in particular:

Perhaps appropriately described as a 'spin-off of the elder Tamburlaine plays,' 'tambercame' appears to have been about an exotic, anti- Muslim scourge, and like The Battle of Alcazar, which featured 'a Portingale' as a choric narrator to relate to the audience the 'strange but true' history of the battle of the three kings at El- Ksar Kbir, 'The plot of The first parte of Tamar Cam' featured Dick Jubie as a 'Chorus' and probable narrator of the play’s unfamiliar story. Because there is no surviving plot for 'the second parte of tamber came,' it is more difficult to say where the sequel might have ended, but there was ample material for a follow-up in Tamar Cam’s (i.e., Hülegü’s) subsequent conquests of Baghdad and Aleppo, his wife’s mercy on the Christians of Baghdad, the death of the fourth emperor 'Mango Cam,' Tamar Cam’s return to the East, and the reversal of Tamar Cam’s victories when his successor became the victim of Christian treachery.133 These events would yield a sequel not unlike the second part of Tamburlaine, where the entropic forces of death and a failed succession overtake earlier triumphs. (142-43)