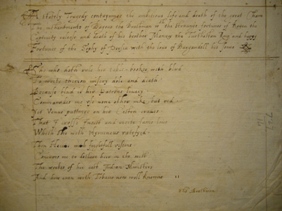 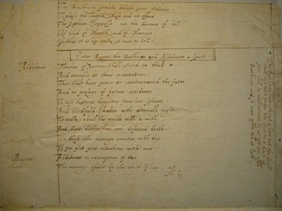 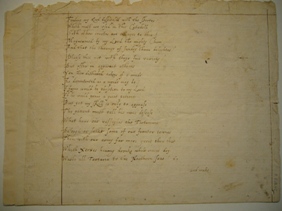 Unknown. Former owners of the MS include:

In addition to the Great Cham’s history, the fragment’s title reveals that the lost play concerned itself with the “inchantments of Bagous the Brachman[,] wth the straunge fortunes of Roxen[;] the Captiuity[,] release and death of his brother Manzor the Turchestan King[;] and [the] happy Fortunes of the Sophy of Persia[,] with the loue of Bargandell his sonne.” Here are the makings of a typical eastern play: a captivity narrative, a Persian Sophy and Turkestan King, and an all-powerful Cham, Velruus, whose wife Drepona declares “other courtes are cottages to this / Mayntained by my Lord the mighty Cham” (45-46). In her speculation that her husband’s displeasure stems from “our vassayles the Tartarians” having “Bessegd or sackt some of our fronter townes” (57-58), Drepona effectively hints at the possibility that the Cham of the lost play had some analogy with the all-conquering Tamburlaine of Marlowe’s creation; Drepona’s hyperbolical solution to the dilemma is for “our army far more great” to “Waste all Tartaria to the Northren Seas” (59, 61).

But whereas the title of this lost play would suggest an imitation of Tamburlaine on par with the “weak sons”, an engagement with Faustian magic is evident even from the fragment’s two extant pages. When Bagous the Brachman enters the stage alone, he is joined by Aldeboran, a spirit or “deuill” whom the stage direction explains “must rise from vnder the stage in a flash of fier” (17 SD). Aldeboran immediately establishes a Faustian pact with Bagous, offering him diabolical temptations:

Fiendes of Auernus shall attend on thee
And tremble at thine incantations
Thou shalt haue power to countermand the fates
And to presage of future accidents
To rise Latonas daughter from her spheare
And blindfold Phœbus with æternall might
To walke about the worlde with a wish
And dart destruction and deserued death
On those who manage enmities with thee
If you plot your ententions with mee. (17-26) 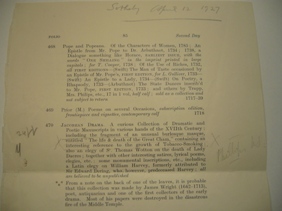 According to the Folger’s catalogue, it was “[d]escribed in the Sotheby April 12 1927 brochure as ‘the fragment of an unusual burlesque masque, entitled ‘The life & death of the Great Cham,’ containing an interesting reference to the growth of Tobacco-Smoking’ (85).” Bentley disagreed with this classification: “The Great Cham is certainly not a masque. As for burlesque, the style is inflated and the tone of the prologue ambiguous, but there is not enough in these sixty-one lines to demonstrate that the attitude of the author was mocking rather than naively solemn” (V.1345).

Date The c.1590 date comes from the Folger’s own catalogue. The Sotheby catalogue lists it as a Jacobean drama. Bentley notes that “the tobacco reference is the only reason for calling The Great Cham Jacobean, for it could be earlier or later than the time of James I” (V.1345). Wagonheim’s revision of Harbage merely lists the fragment as “17th Cent.” (Supp. List I.). Proudfoot, in his Malone Society edition of the fragment, allows that “[a]n earlier limit is suggested by the style and allusions, which imply knowledge of the tragic writing of the later 1580s and early 1590s” (64-65) but concludes that “a date within the first two decades of the [17th] century may seem likely enough” (65).

The name Aldeboran, here a spirit or “deuill”, is also associated with a star.
cf. Tamburlaine: “Raise me to match the faire Aldebaran, / Above the threefold astracism of heaven” (2 Tam, 4.3.61-62)
cf. Agrippa: “The third is the star Aldeboran” (p64).

The name Velruus (or Velraus), for the Great Cham, may simply be related to / derived from the ostensibly authentic Tartarian word for “mighty king” (“Vlu-Chan”). In his discussion of “The ruine of the Turks first Empire in Persia: with the successe of their second kingdome in the lesser Asia vnder the Aladin Kings,” Knolles writes:

the Tartars or rather Tattars . . . stirred vp by their owne wants, and the persuasion of one Zingis (or as some call him, Cangis) holden amongst them for a great prophet, and now by them made their leader, and honoured with the name of Vlu-Chan, that is to say, the Mightie king (commonly called the great Cham)…. (75)