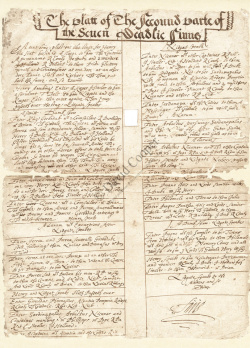 Greg initially labeled as "brilliant" F. G. Fleay's conjecture that the play represented by the Plot of "2 Seven Deadly Sins" was the "Four Plays in One" given at the Rose playhouse by Strange's players on 6 March 1592 (Greg, Papers). By 1931, he was backing away from its identification with the play in Henslowe's Diary. However, he did not back away from an assignment of the play to Strange's players. His argument is complex and merits close examination. Suffice it here to say that Greg, trying to reconcile his belief that Alleyn had owned the Plot with the presence in the Plot of Richard Burbage's name, concluded that "The Seven Deadly Sins" (which he still believed to be Tarlton's play) "was probably acted about 1590 by Strange's men alone at the Curtain" (Dramatic Documents 19). Greg dated the Plot in 1590 because he believed that the "violent quarrel between James Burbage and the Admiral's men" in the winter of 1590-1 would have ruled out a combination of players that included both Edward Alleyn (whose name is not in the Plot) and Richard Burbage (whose name is in the Plot) (Dramatic Documents 110-11). For a challenge to the assumption that the hot words between John Alleyn and James Burbage recorded in legal documents concerning the Theater had such severe commercial consequences that no Alleyn would thereafter play on the same stage with a Burbage, see Knutson (1-3).

McMillin exposes the network of hypotheses on which Greg (and before him, Fleay) had constructed the assignment of the Plot of "2 Seven Deadly Sins" to Strange's men before May 1591. Looking at the evidence of the twenty names of players in the Plot, McMillin is the first to call attention to the number of those players with connections to the Chamberlain's men (54). He acknowledges that a cluster of the players were with Strange's men in 1593 but concludes that the "most obvious company with whom these names come together according to other documentary data is the Chamberlain's men in the later 1590s" (61). As something of an afterthought, McMillin observes the coincidence of subject matter in the "harey the vj" played by Strange's men, 1592-3, and usually ascribed to Shakespeare as his Henry VI.