Hill's List of Early Plays in Manuscript: Difference between revisions 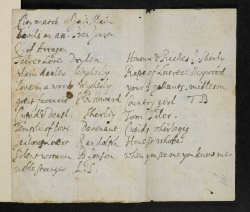