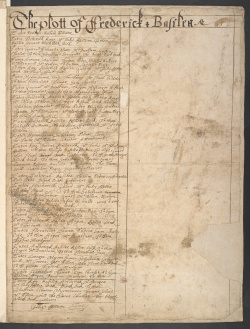 Frustratingly, despite the survival of a complete plot and a string of performance records pertaining to this lost title, the subject matter remains elusive. Wiggins (1078) succinctly notes that "[i]n the course of the play, Theodore acts as liaison between Leonora and the Moors, but nothing more of the story may be gleaned from the surviving document". The character names ought to provide the strongest clue to the narrative, but no "Frederick and Basliea" story is known.