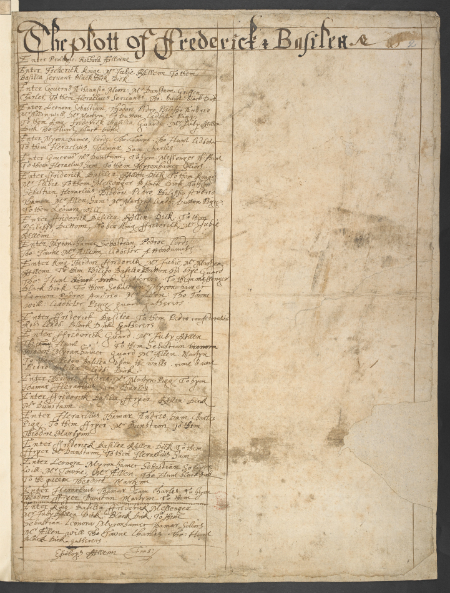 * The actor for Heraclius is not named in line 6;
* The Queen named at line 49 "is almost certainly Basilea"
*The Moor named at line 5 is probably Thamar;
*and possibly the Lord at line 11 may be Pedro, though Greg adds "I rather doubt it";
*The character of the King is omitted at line 33 (124)

Other notable features highlighted by Greg include the lack of properties mentioned, the lack of direction for stage noises, the absence of descriptive directions, and the lack of prominence of any influence of the Book of the play (except for the reference to "the walls" in line 36, "which is interesting as showing how persistent a literary direction may be" [124] -- references to the balcony or descending to the main stage are all that is required in a performance document). The only doubling consists of Dunstan playing the Governor in scenes 2-5 and the Friar in scenes 13-18, and Ledbeter who plays Pedro but also (in scene 4) a Lord attending Myronhamec (125). Finally, Greg observes that "[i]n the circumstances it is rather strange not to find Singer in the cast: he was, of course, a 'clown', but that does not necessarily mean that he only acted comic parts" (126)