An undated note in the hand of Sir George Buc on the title page of one of five surviving copies of Locrine (printed 1595) reads: 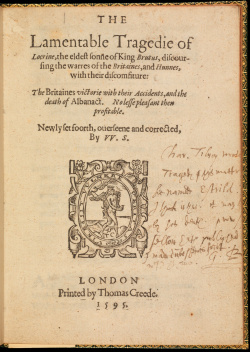 Buc signature on the title page of Locrine; reproduced with permission from the Fondation Martin Bodmer, Cologny, Geneve. See the full text here.

The story would have to be a pseudo-biography of Estrildis, daughter of the King of Germany, in the time of the war between Brute, first king of the Britons, versus Humber, King of the Huns, c. 1115-1075. B.C.E. According to Geoffrey of Monmouth, Estrildis was one of three captives aboard the ship of Humber, which held the spoil of Humber's recent conquests in Germany. Locrine, eldest son of Brute, defeated Humber in battle (Humber fled and drowned in the River Humber). Locrine then pillaged Humber's ships and claimed the girls. It was Estrildis who set him on fire, however: "so fair was she that scarce might any be found to compare with her for beauty, for no polished ivory, nor newly-fallen snow, nor no lilies could surpass the whiteness of her flesh" (Sacred Text).

A more recent version of Estrild's story than Geoffrey of Monmouth's is in The Mirror of Magistrates, as expanded in 1574 by John Higgins, with the title, "How Queene Elstride the Concubine and second wife of King Locrinus was miserably drowned by Queene Guendoline, The year before Christ. 1064" (Haslewood)

Elstride begins her narrative at home, in Germany, where her beauty has already attracted many suitors. The most potent, Humber, cowed her father into handing her over. Humber then brought her with two other beauties to Britain, where he was soon "drencht, and drounde," to her distress (st. 6). Confronted now with an army of claimants, she appealed to their pity with "teares, … sobbes, … [and] wringing handes" (st. 10).

The king, Locrinus, claims her as his own and agrees to marry her (rather than keep her as concubine), but on her wedding day Corinæus confronted Locrinus with the pre-contract to marry Guendoline, his daughter. Locrinus acquiesed, and Estride was filled with hate and vexation; she threatened to leave. Locrinus, to reassure her of his love, built vault where she would live secretly. In time, their daughter Sabrine was born.

When Corinæus died, Locrinus rejected Guendoline, who then declared war on Locrinus. She was successful, and Locrinus was killed in battle by an arrow from one of Guendoline's warriors. Summoning Elstride, Guendoline berated her, calling her "harlot whoare" and "painted picture" (st. 32). She threatened to drown Elstride, bound hand and foot, and Sabrine with her. Sabrine begged to be killed in her mother's place, but Guendoline was pitiless. In a three-stanza-long "Adew," Elstride ended her lament with a description of bobbing in the water as Sabrine tried to join her. At length, she sank to the river bottom and lay "as dead and cold as marble stone" (st.49).

The only surviving reference to "Estrild" is Buc's note (See Historical Records.)

The context for discussion of "Estrild" by scholars is the play, Locrine, initially in regard to Buc's handwritten note on the title page of one copy of the 1595 printing of Locrine and subsequently in regard to its having been an early version of Locrine somehow revised into and absorbed by the author or reviser of the extant play. Through arguments on the authorship of Locrine, "Estrild" is drawn into discussions of Robert Greene and Selimus, as well as of W. S., whose initials appear on the title page of Locrine.

Collier, in Catalogue of Early English Literature at Bridgewater House (1837), described the Buc note on the title page of Locrine (41); he added to that description in 1865 in Bibliographical Account of Early English Literature by providing a biographical blurb on Charles Tilney as well as asserting that "the authorship of "Locrine," falsely imputed to Shakespeare, is thus decided" (i.93-5, esp. 95 [as quoted by Greg, "Three Manuscript Notes," 313]).

Fleay knew of Buc's note, because he quotes Richard Simpson (without citation) as misattributing Locrine to Charles Tilney, whose name occurs in this matter only in the Buc note(BECD, 2.321))

Chambers. ES knew of Collier's comments on Buc's note, indicating Tilney's authorship of Locrine; but, skeptical generally of Collier's claim and persuaded by other evidence, Chambers inclined to date Locrine in 1591. He did, however, allow that the extant text might be "a very substantial revision" (4.27).

Greg, in the context of examining three manuscript notes by Sir George Buc, reviewed the contributions of John Payne Collier to scholarly awareness of Buc's note on the title page of one of five surviving copies of Locrine. He credited Collier with having been the "earliest informant"of Buc's note, which he also "reproduced, evidently in hand-traced facsimile," without the heading (312). Greg was primarily concerned with whether the Buc note was a Collier forgery, and he decided that it was not. In the course of his examination of the note, Greg claimed to have transcribed it accurately (in a note, he says, "None of the previous attempts are reliable" [314]). He closed with musings on the truth quotient in Buc's note on the Locrine title page: "Buc was in an excellent position to ascertain the authorship of contemporary drama. ... Was he correct in his conjecture—for it is nothing more—that Charles Tilney's Estrild was identical with W. S.'s Locrine?" (319-20). Greg decided to let "literary historians ... thresh out" that question (320). However, footnoting his statement about Buc's authority on Tilney's authorship, Greg pointed to the uncertain date of Buc's note. He observed that if it were early, Buc had as yet no "connextion with the Revels Office"; and, if the note were late, Buc "died insane" (319, n.2).;

Maxwell, acknowledging that the title page of Locrine implies strongly that the play had been "reworked or revised," observed that the "original need not have been an old play" (26). He was more interested in the sources and authorship of Locrine than in the presence of ‘’Estrild’’ in the 1595 text of Locrine.

Berek accepts the Buc note at face value and argues confidently "that by 1586 there existed a play called Estrild on the subject of Locrine, a play which included dumb-shows by Buc which he still had in his possession after 1595, and which for this reason—as well as for others which will emerge—were different from the ones surviving in the printed text of Locrine" (34). Those other reasons include Berek's claim that "both comic scenes and dumb-shows were written by the same person" (35). Without reconciling the ascription of the dumb-shows to Buc, Berek dates the work of that "same person" to "post-1591" (35). Put another way, Berek ascribes to Tilney "Act V, the epilogue, and a few parts of scenes in Acts I-IV" (36). He considers Act V "the part of Locrine most likely to be by Charles Tilney" (36). "Estrild," he claims, was a revenge tragedy presenting Locrine as a just avenger who destroyed the invading Humber and punished him for the death of Albanact" (37). He attributes the "Senecan trappings" to Tilney (38). Berek also cites T. W. Baldwin, in The Literary Genetics of Shakespeare's Plays, 1592-1594, as having attributed "Estrild" to the repertory of the Queen's Men (40).

Griffin, asserting the authenticity and reliability of the Buc note, focuses on the biography of Charles Tilney, whom he identifies as a "cousin to Edmund Tilney" (37). Putting that biography together with the politics of the Babington Plot, Griffin argues "that Estrild was more politically sensitive than we might now guess if we did not know who had written it" (38). He asks, "Was Estrild composed as a persuasion-piece along the lines of Gorboduc, half-warning and half-threatening on the succession question?" (39). Given his suggested analogue of Gorboduc, Griffin sees irony in the fact that Thomas Sacville sat in judgment on the Babington conspirators and probably witnessed the execution of Tilney, whose last words at the block were that "'all young gentlemen [should] take warning" from his fate (as if he were himself a speaker in The Mirror for Magistrates [39]).

Wiggins, Catalogue finds Buc "less than certain" about the identity of the 1595 Locrine as the play he remembers (and worked on) by Charles Tilney (#770). Wiggins is more comfortable considering the lost "Estrild" as a source used by the author of Locrine, rather than the text revised into the later play.

Knutson discusses "Estrild" in the context of Ur-plays, that is, supposed early versions of now-extant plays. Generally skeptical of lumping together plays with shared subject matter as versions of one another, she questions how the author of Locrine might have acquired a copy of "Estrild" and "why he would risk the blowback of folding it into his own, given public awareness of Tilney's treason and the availability of source materials without political baggage" (39).

Sharpe defends the accuracy of Buc's note by defending Buc himself as "a respected scholar and antiquarian" who was furthermore a near-contemporary of Tilney (660). In support of Locrine as old enough to have been written by Tilney, Sharpe discusses its similarity to "the kind of Senecan Inns of Court tragedies pioneered by Norton and Sackville's Gorboduc (1562), even imitating its first scene from its progenitor" (660). He would place the absorption of "Estrild" into Locrine between 1591 and 1594.

Kirwan is not persuaded (as are Berek and Sharpe) that Buc was identifying Locrine as a lost play by Charles Tilney called "Estrild" (133-4).

Richard Dutton, in the Oxford DNB, identifies Charles Tilney as the son of Edmund Tilney's cousin, Phillip. He continues: "Phillip and Edmund Tilney were bitter about the treatment Charles received; in a Star Chamber suit Rafe Bott testified that they ‘thyrsted and longyd to be revengd on him’, believing he had had custody of Charles in the Tower."

The poem,"The Complaint of Elstred," was published by Thomas Lodge in 1593. Its composition date is unknown. Baldwin Maxwell argued that Lodge's poem was a source for Locrine but stopped short of claiming that the author of "Estrild" also knew it. Lodge's interest in the narrative does nevertheless show that the story of Estrild had currency.